On the 25th of January 2016, Dan Davis conducted an interview with the band EKS-port for the Cover-Up! News Magazine. The full interview is published in German under the link here. Here we are publishing a large part of the interview in English.

Dan Davis: Hello! Can you say some words about EKS-port and the history of the Project? 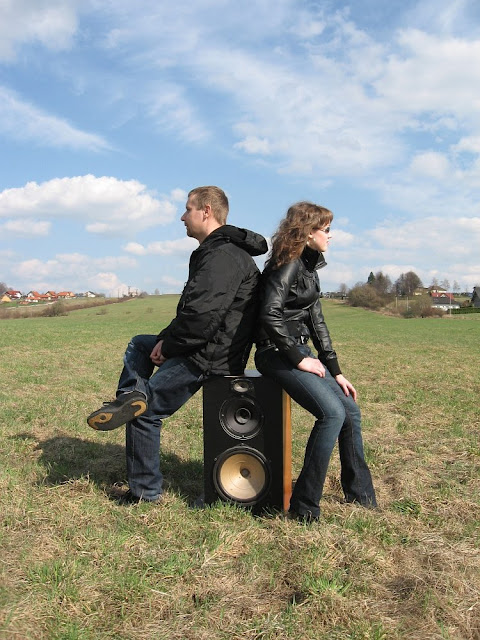 MC Else: Hello! Yes, we can. We met as two solo musicians in Cracow in Poland in 2008. After our meeting, we got the idea to do a music project and we called our duo EKS-port. From that moment we also started a relationship and now Piotr is my husband. I come from the Czech Republic and Kromproom comes from Poland. Our band name can be read as Else Kromproom Sound-port. It arose from the word Export and means an exchange of musical ideas between us as a kind of international cooperation.

Kromproom: Yes, that is a short origin of the band's name. Our debut album eks-peryment was released by Carlos Peron’s label in 2011. From the album the track, Two Faces was chosen for the soundtrack Revolution, Baby! - Darkness, which was the collaboration between me and Jens Esch Centurio. Since 2012, our EKS-port productions such as the album 7788 km/h (2013), the single 1-2-3-4-5-R (2012), and ABS – Remixes (2013) have been released digitally by our label Kromp Room Records. The track ABS was officially remixed among others by a well-known German band called The Psychic Force. Other remixes of the track ABS are produced by DJ Dubtron from India, Vulturius, and Jamick from Poland. 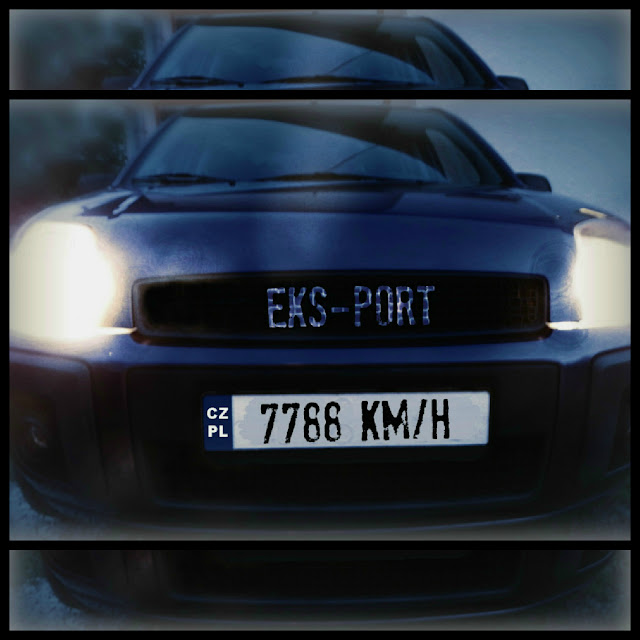 Dan Davis: When did you start to make music?

MC Else: In 2004 as a sixteen-year-old girl I was fascinated by the world of Polish hip-hop and due to this fascination I began rapping lyrics written by myself. Together with my brother (DJ YoGi) and our friend we founded a group called Touareg Crew. Our group played live a few concerts in the Czech Republic, including in Prague. From 2006 to the beginning of 2008 I performed solo and published my first demo album called 2004-2008, which I recorded with my brother and various other artists.  I grew up among sounds because my dad owned a music store for 15 years. I have been a member of the music project EKS-port along with Kromproom since 2008. I have collaborated with Carlos Perón (ex Yello), Jens Esch Centurio, and other artists from all over the world. In 2009, along with Kromproom, we founded the Kromp Room label.

Kromproom: At the beginning of the 90s I composed music modules on Commodore Amiga computers under many pseudonyms (yazz, jazz, krompiu). In the second half of the 90s, I was a member of the group Virtual Madness along with Rafał Głębowski and Marcin Kmiecik. Together we created Brain Killer, one of the first FPS (First Person Shooter) games for the Amiga. I have been producing music as Kromproom since 2001. I have been a member of the music projects EKS-port with MC Else since 2008 and CbK (Centurio beatz Kromproom) along with Jens Esch Centurio since 2011. I collaborated with Carlos Perón in 2010-2011. In 2009, along with MC Else, we founded the Kromp Room label, which is still going today. In 2012, Kromp Room was registered under the name KROMP ROOM RECORDS (aka KrompRoomRecords) by GVL in Germany.

Dan Davis: How would you describe the music of EKS-port?

Kromproom: We are fans of music and do not limit ourselves to one specific style or trend. I liked it when we start recording Eli’s voice because, in my opinion, it adds a special meaning to EKS-port productions. MC Else has an unprecedented tone of voice, so I had to learn to work with her rap and vocal in our studio. 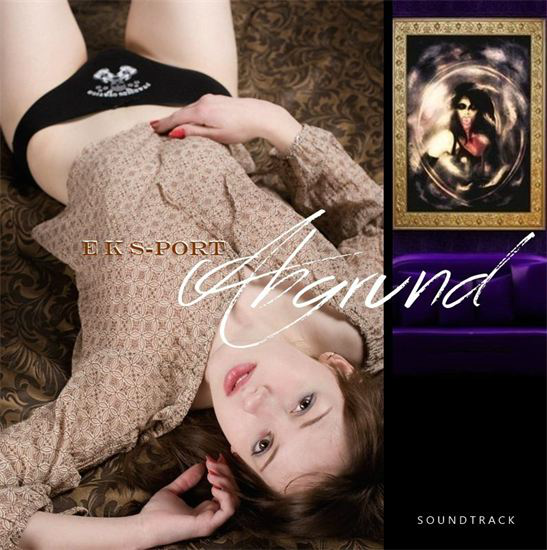 Dan Davis: We are talking today because you have the new album called Abgrund, a soundtrack to my book of the same name. How long did spend work on it?

Kromproom: If I remember correctly it was in January 2014 that I received the information from you, that you wanted someone to compose music for your art-book Abgrund. Then we agreed that the music would be produced by EKS-port.

MC Else: At the end of 2014 the work on the soundtrack gathered pace when we got the book from you, which made a big impression on us. It was a great thing to stimulate inspiration. We can say that we worked on the soundtrack for about 12 months.

Dan Davis: I think we should talk about each track on it. You did 10 tracks because there are 10 chapters in the book, and each track has the name of artwork from me. So can you say a few words about the first track No Evil, your inspiration,  musical setting, ideas, work, and so on…?

MC Else: The picture called No Evil shows the horns done by hand. In various cultures of the world, it means something bad but also something good so we got the idea of creating the first track with heavy beats and bass. My lyrics, which I rap in the Czech talk about the confrontation between different nationalities in the same place. Foreigners come to us and say, that they are doing no evil but the reality is quite different. The lyrics bring up the subject of the hatred of some people towards our European culture.

Dan Davis: Now about the musical setting, inspiration, ideas, and work for the other tracks: We will go to track 2: Aura. Can you say a few words about it?

Kromproom: The track is an experiment. Aura shows the spatial atmosphere of a room where you can see unique photos and images. The dark purple room with a sofa next to the wall looks like a scene from a film by David Lynch.

MC Else: The picture inspired me to write lyrics about the friendship between a girl and the animal creature, which you can see in the picture. It is a combination of a dog and a dragon. Naturally, I needed to sing the refrain to emphasize the love and friendship between the two entities.


Kromproom: We composed music to the picture because I was a professional soldier for several years. The composition is melancholic which expresses the emotions of a soldier who must leave his family to fight for freedom.

Dan Davis: Isn't there is an option of a free download of this track as a statement against war and terror?

MC Else: This song was composed especially for our soldiers who are fighting for our security and hindering the breakout of a major war. We agree with the use of this composition in our fight for freedom and against terror. The track is available to freely download from our SoundCloud profile at https://soundcloud.com/eksport/soldier. 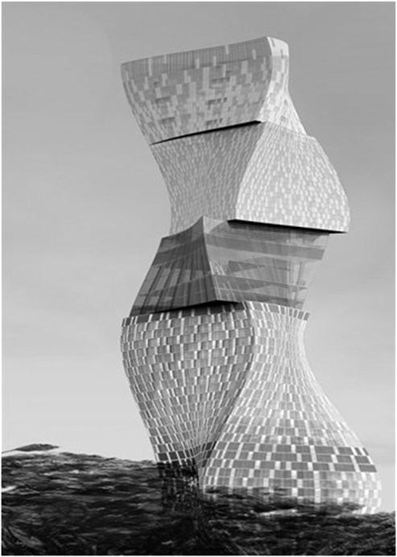 Kromproom: The depictions of deformed buildings in Traumzone inspired us to create a trance composition, which starts with the sounds of city traffic. MC Else wrote the minimalist lyrics in English. We wanted to make a mix with trance rhythms, bass, and Else‘s voice, that transports the listener to an industrial-dreamland.

Kromproom: The mirror is a very interesting and mystical invention and stimulates the human imagination. When I was a child I wondered what was on the other side of a mirror. This short musical composition is a bridge between the world and its mirror image.

MC Else: Based on this black and white image I wrote the lyrics in Czech, which tell us that our life is not just black or white. Every person can achieve their goal if they are strong and patient. MC Else: Your picture inspired me to write the lyrics, just as for all the other tracks. It is a simple tale of a wonderful person who comes from space. This cosmic person has supernatural powers. For a more cosmic sound, I decided to sing in the final part of the song.

MC Else: The Czech lyrics, that I wrote for this track describe the picture perfectly. Let me quote a brief excerpt: ...I'm a dangerous woman, I'm holding a gun, you can not escape from me, I’m like a dragon, I’m an aggressive woman, drop the weapon! You'll be severely punished for your behavior... It's a bit feminist :)

Kromproom: I really like these lyrics: ...my feminine shape and plunging neckline destroy you more than my gun... :)
Dan Davis: Track 10 Salome: 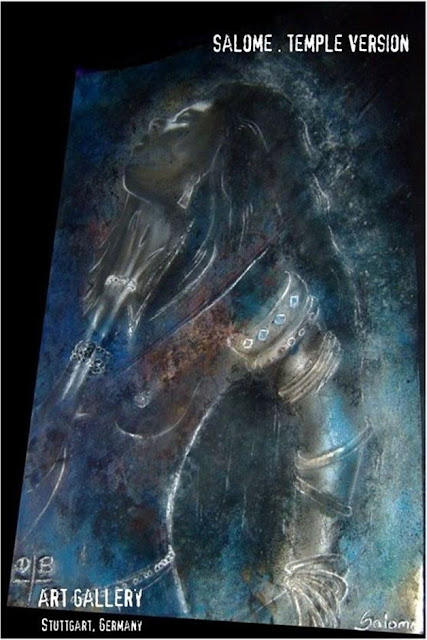 Kromproom: In this picture, you can see a woman in a sensual pose. For this reason, I recorded my voice as the sound of a man, who expresses the desire for Salome.

Dan Davis: Miss MC Else… on track such as Dog and Moonchild, you`ve changed from rapping to tuneful singing in some parts. Is this the first time and a new facet of you on this album, a coming out ;-)?

MC Else: When I was a child I started singing and sang in a small children's choir and composed my first songs. When I was a teenager I started rapping my lyrics but I have used singing to add spice. I've started working on my solo album with Kromproom, in which I am also going to do some singing.

Dan Davis: What is your favorite track on ABGRUND:

MC Else and Kromproom: We like Dog because it seems to us the most interesting and experimental. We also like Traumzone and Moonchild. On the whole, we are pleased with the entire album.

We would like to thank all those people who contributed to this album, especially you Daniel for following us to compose the soundtrack to your art-book Abgrund. Thanks also to Marek Holewiński who created the audio teaser for the album.

The full version of the interview in German is under the link here.